Please feel free to post a question or just join the conversation.

Posted by Alec Houle on Friday, 20 March 2015 in Discussions on Carpet & Upholstery 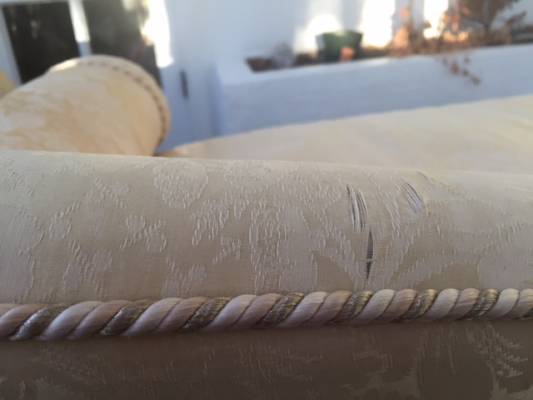 This is a subject that really should be both understood and explained to homeowners by professionals before providing service in many areas.

In the carpet and upholstery cleaning field, I see this quite often and I also realize even our industry does not do enough to educate the consumer.

Pre-existing conditions usually refer to conditions that are present before the onset of any work onto a particular project. An example of this could be a plant that is on a rug and the plant is watered regularly but rarely moved.  Next, the pot develops a leak or watering overflows the container.  Each watering episode creates a damp rug underneath the plant. It doesn’t take long for that dirty water to leave a soil mark. That’s not the real problem. The real problem is the damage the moisture has caused to the rug.  After just a few days of this moisture and dampness, mold will start to form and break down almost any type of natural fiber. Since many rugs and especially better quality rugs made of wool, linen or silk will have a natural backing including cotton or jute. These materials in the backing offer support structure to the foundation of the rug and give all the integrity of strength to the rug. Once this mold starts, it will deteriorate the backing and you will lose all your fiber support allowing for the rug to fall apart or fibers easily pulled from the rug.

So, along comes your carpet cleaner. He has no idea as to how long this has been going on and in many cases, the plant has been moved and all that is visible is a soiled area which could also look as though there was a spill at some point there. Without an explanation of what this stain could be or lifting the rug to inspect the backing, he has no idea of the extent of damage that lies beneath, just waiting to rear its ugly head.  As he starts to clean the dirt stain, the surface dirt comes off relatively quickly but since there is dirt deeper in the fibers, he must continue to go over and over until it is all removed. As he does, the amount of suction will increase and the fibers will start to pop out, leaving a nice round hole in the rug.

He can’t believe his eyes and neither can the homeowner that is witnessing this.  Did he ruin the rug?  No, this is a pre-existing condition. The damage was already done. He was just the unfortunate one to uncover the real level of damage. The homeowner may feel, well it wasn’t like that before and want to blame to carpet cleaner. That’s not the truth. The damage was like that before, the cleaning did not damage any other area, only the area that had that pre-existing condition.

So, how should this have been handled?  Ideally, if the homeowner knew, they would make the carpet cleaner aware of the leak. Then again, perhaps they have never even moved the plant and still aren’t aware there is a possible problem. Once the carpet cleaner is aware of the issue, whether he is told by the homeowner or sees the possible damage once moving the plant himself. He should discuss with the homeowner the possibilities of the true extent of the damage already done. In either case, communication between both parties can only help.

Other examples of this can be pet stains that appear to be mildly yellow but have weakened the dye structure and once cleaned cause the original color to all to run together. Another example can be damage done to upholstery through either exposure from the sun causing dry rot or mildew and mold causing damage and rot to the fabric.

With all this in mind, good communication between the carpet cleaner and the consumer should be used.